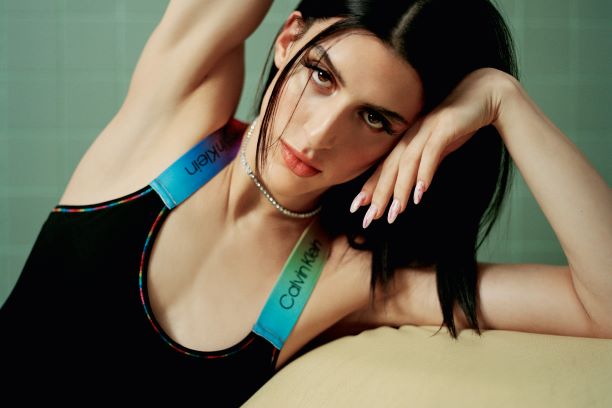 Calvin Klein’s latest campaign is a celebration of defining moments in the queer journey. A continuation of the #proudinmycalvins movement, the campaign revisits the transformative events that shaped the lives of talent from different parts of the world at different moments in time.

While each of the cast stands out for their highly individual background and rare talent, they are all united in their shared passion for – and impact on - the LGBTQIA+ community.

The nonbinary Barcelona-based artist who debuted the Arca moniker in Summer 2011 artfully blends genres across music, performance and painting.

“The first time that I gave myself permission to cruise. In that moment of connection, I felt a vitality. I felt free of a doubt…excited for what was to come.”– 2009

Artist, DJ and fashion designer Honey was born in Chicago and splits her time between New York and Berlin. Her new album Black Girl Magic will be out later this year.

“The first time in my life that someone had seen me before I saw myself...It was another trans woman that said to me, ‘You belong in a skirt.’ I realized at that moment that I could exist.” – 1990-something

The American actor and singer recently starred as ‘Tony’ in the Broadway revival of West Side Story and is featured in the upcoming season of Modern Love and the Universal film adaptation of Dear Evan Hansen.

“My hand just crept down my thigh, waiting for it to brush up against him. It finally did. It was like electricity. My whole body was flashing colors. I knew there was no going back after that.”– 2010

The spoken word poet and activist draws on their own personal experiences as a trans person of color. Their work centers on exploring, understanding, and dismantling social norms.

“I’ll never forget it. I call it my transition 2.0. Being able to step back into femininity and celebrate that glory...where once those things would have been really triggering. I felt weightless and free.”– 2020

The singer, songwriter and producer from Brooklyn, NY quickly rose to fame after her debut single in 2018. It was through her mother, who worked in fashion, where she first found her LGBTQIA+ family.

“I started to realize that I was part of this tapestry of queer people that have made really powerful, moving work. When I realized that, everything made sense.”– 2012

The Madrid-born actor is best known for his role as Omar Shanaa on the hit television series Elite, a Spanish thriller and teen drama.

"When I told my mother…I thought she would be shocked and make some big scene. She said, ‘Ok, I'll get some tickets for The Sound of Music.’"– 2013

A multi-hyphenate talent, the artist, model and muse, Raisa pulls from her West Indian background and queer underground club experiences to reshape how society views beauty and fashion.

“When I was in catholic school...when I first shaved my head. My principal was like, ‘We need to watch her because she’s going to be wild.’ I felt like a badass."– 2010

The queer Afro-Indigenous Brazilian artist blurs the lines between art and fashion. The multimedia artist focuses on the need for advocacy and bridge building with the queer community in his home country.

The campaign takes an authentic approach to styling, featuring key pieces from Calvin Klein’s Pride 2021 capsule paired with denim and underwear essentials that showcases each talent’s own style. This year’s Pride collection features classic silhouettes including the Modern Cotton bralette and boxer briefs with the Brand’s logo waistband in a limited-edition palette. Cropped t-shirts and crewneck sweatshirts are also featured in the campaign, as are denim bottoms, truckers, and the iconic white tee.

The global campaign will launch on May 26 with an anthem video that brings together a montage of stories and footage from the campaign. A series of short films that feature each cast member’s individual story will rollout throughout the year on Calvin Klein channels alongside extended #proudinmycalvins content.

Calvin Klein partners with multiple non-profit organizations in support of LGBTQIA+ advocacy, equality, and safety. This year, Calvin Klein is proud to announce a two-year partnership with the Trevor Project, the world’s largest suicide prevention and crisis intervention organization for LGBTQIA+ young people. Through the partnership, Calvin Klein will use its platform to increase the knowledge of Trevor’s mental health resources and help promote inclusion for the LGBTQIA+ community.

In addition, Calvin Klein supports ILGA World’s work as the global voice for the LGBTQIA+ rights of those who face discrimination on the grounds of sexual orientation, gender, identity and/or sex characteristics. The brand has also committed funds to the Transgender Legal Defense and Education Fund and continues, alongside parent company PVH Corp, to support onePULSE Foundation, the nonprofit established by the owner of the Pulse nightclub following the June 12, 2016 shooting in Orlando, Florida. The brand’s support of onePULSE began at the request of our company associates who wanted to celebrate the memory and legacy of their colleague, Frank Hernandez.

For more information on each organization and to learn more about the campaign, visit [insert projects page].

This webpage uses strictly “necessary cookies” for its proper operation which allow you to navigate and use its functionality, such as access to secure areas, as well as the below listed categories of optional cookies.

During your entry to our webpage you have the ability to accept all cookies (“Allow All”), or continue your navigation rejecting all optional cookies (“Decline All”), or select specific cookie categories from the below checkbox list and then click the (Allow Selection”) button. For more information press here. You may change your consent at anytime.